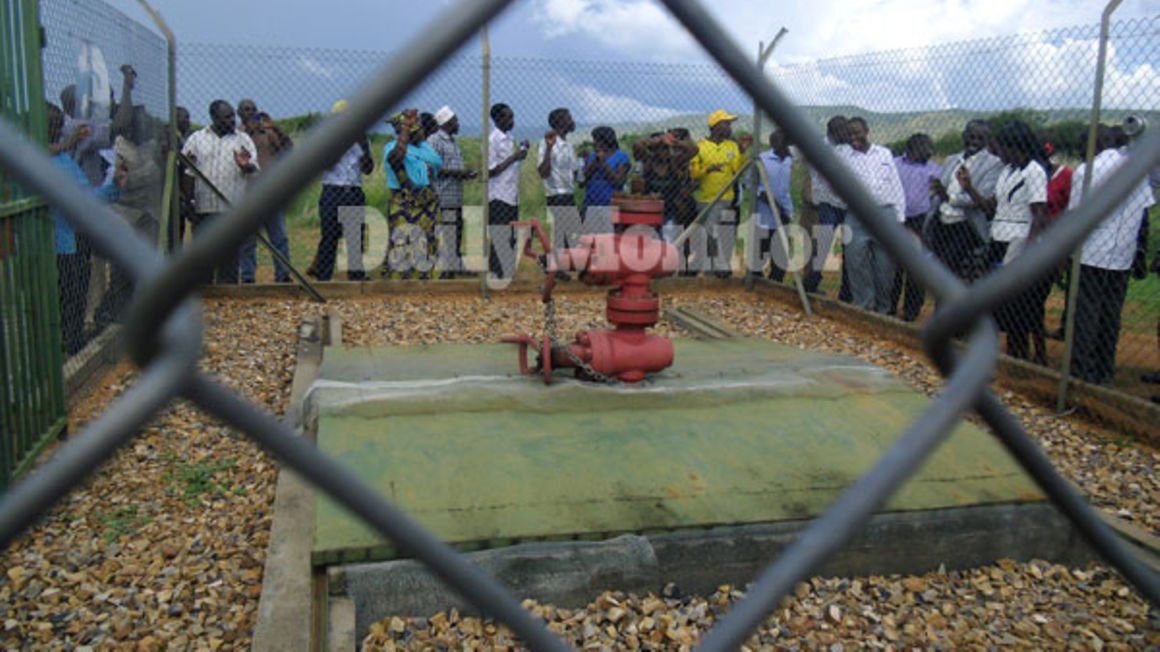 Under the project, government plans to build a central processing facility (CPF) with capacity to process 190,000 barrels of oil and 700,000 barrels of total liquid per day.

Government plans to build more than 160km of flow-lines which will transport crude oil and water from the wells to the CPF.

There are plans to build a   95 km 24 inch feeder pipeline which will transport the processed crude oil from the CPF in Buliisa to the export hub and refinery in Kabaale in Hoima District.

The project requires approximately 2,400 acres and the land acquisition process is ongoing.

However, it has received mixed reactions from locals in the oil rich Buliisa District.

A total of  29 resettlement houses have also been built in Kasinyi with  three more pending but some PAPs have not received any compensation.

“More than nine families have not received any compensation, ”  Mr Kaliisa revealed.

An independent monitoring study conducted by the Civil Society Coalition on Oil and Gas (CSCO), with financial support from the World Wide Fund for Nature (WWF) indicates that some PAPs rejected compensation due to hiked prices for land compared with the Shs3.5m per acre that was being considered by the chief government valuer.

The PAPs also resisted government attempts to settle them in areas with  worse social services than  they currently live.

“PAPs are concerned about blockage to social cohesion and cultural identity as the established project infrastructure will separate villages and families,” Mr Joseph Mukasa Ngabwagye,  a Senior research fellow at the Advocates Coalition for Development and Environment (Acode), said.

TEPU has undertaken the FEED for the Enabling Infrastructure including access roads, well pads, Masindi Check Point, construction camps and Industrial Area among others.

However, the ESIA report for the Tilenga project which the National Environmental Management Authority (Nema) approved in April 2019 for a period of 10 years, has been contested by a section of locals and civil society organisations who have  since dragged Nema and PAU to court seeking  cancellation of the report.

In its suit before the High Court Civil Division, the African Institute for Energy Governance (AFIEGO) states that the Tilenga ESIA was marred by flaws, procedural irregularities thereby denying AFIEGO and other interested parties a chance to effectively put forth their views aimed at protecting their right to a clean and healthy environment.

“If the said certificate of approval is not quashed, the public shall suffer irreparable damage as the approved ESIA report allows oil activities in the most sensitive biodiversity ecosystems including Murchison Falls National Park, Lake Albert, Budongo Central Forest Reserve,”  the suit reads in part.

But the Attorney General has asked Court to dismiss AFIEGO’s suit for lack of substantial merits.

“Grant of orders sought by the applicant will undoubtedly delay the implementation of the Tilenga project and eventually affect the anticipated benefits of oil to all Ugandans only for the selfish benefits of the applicant,” Ms Jane Mbabazi Byaruhanga, the PAU environment manager, said  in her affidavit filed in court. Court is yet to rule on the matter.

In 2017, Mr Jelous Mulimba Mugisha was elected by locals in Kasinyi village as chairperson of the Resettlement Planning Committee (RPC) which was charged with representing the interests of the PAPS.

The committee worked closely with Total E & P Uganda, Tullow Oil and government to ensure a smooth implementation of the resettlement exercise.

“After repeated talks with officials of oil companies and government who could not address our concerns, some PAPs sued Total and government in France. We are waiting for judgement,”  Mr Mulimba said.

Ms Gladys Birungi, a mother of five, vacated her family land in Kasinyi Village in 2017 when government announced a deadline  for PAPs in an area earmarked for a CPF.

Her family rented a house in Kasinyi Trading Centre with hope of  being paid and resettled in time so that they could resume their subsistence farming.

“We demanded for Shs10 million per acre but government officials gave us Shs3.5m per acre. When we protested the compensation rate, the officials said it is up to us to accept or leave the money,” she said.

Ms Birungi is among the 30 families being resettled in houses built by the government.

She revealed that the government paid her Shs15m as compensation and disturbance allowance for her four-acre piece of land and properties but claims the payment was inadequate.

“I failed to buy an acre of land in Ngwedo Sub-county after owners demanded Shs7m per acre yet I was paid 3.5 million by government,” Ms Birungi said.

The Kasinyi LCI Chairperson,  Mr Gilbert Balikurungi, who is among the nine people who rejected compensation said he wants the rates increased considering that the price of  his land has appreciated.

In a turn of events, government through the Attorney General has sued nine families in Kasinyi Village who turned down compensation.

In his miscellaneous cause No 25 of 2020 filed at Masindi High Court, the Attorney General has requested court to allow government deposit in court Shs368,887,602 being compensation for 74.21 acres which are part of the land earmarked for an industrial area for the Tilenga oil project.

The Attorney General  has  also requested court to discharge any liabilities arising out of any claim and/or action for the compensation currently in its possession in respect of the said land.

He has asked court to grant government vacant possession of the land to enable the Tilenga project to proceed.

In his affidavit in court, the Permanent Secretary in the Ministry of Energy,  Mr Robert Kasande, said the Chief government valuer carried out valuations of the project land and disclosed compensations to the PAPs but the respondents disputed the value and refused to present their particular disputes to the Chief Government Valuer for consideration.

“I know that the respondent’s actions and/ or inactions have constrained the applicant’s activities and delayed the implementation of the Tilenga project all to the detriment of all Ugandans,” Kasande’s affidavit reads in part.

He said project delays are detrimental to government and oil companies, which are under the joint venture partnership. He added that the project is critical for the progress of the oil and gas sector which plays a key role in Uganda’s social -economic development.

“The delay in acquisition of required land will affect the project timelines and economics,” Mr Kasande said.

Asked if contestations by PAPS will affect oil projects, Ms Gloria Sebikari, the PAU Corporate Affairs and Public Relations manager, said projects are ongoing  much as there are court processes and discussions.

“We handle concerns arising with caution to ensure projects are not impended. Projects remains open to discussion to resolve intricate things arising, ” she said.

This article originally appeared in the Daily Monitor