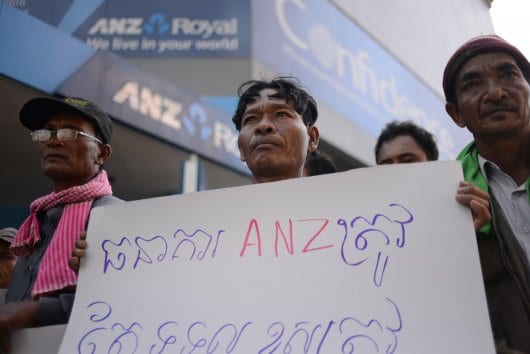 Australia’s ANZ Bank today launched a Grievance Mechanism Framework to evaluate and respond to human rights related complaints associated with its corporate lending customers. This precedent-setting move makes ANZ the first large commercial bank in the world to adopt a human rights policy that gives communities harmed by ANZ-financed projects a real path to justice.[1] The announcement follows an extensive 18-month consultation with respected human rights advocacy organizations and puts the pressure on other large banks to follow suit.

The Framework sets out how ANZ will respond to complaints from community groups that consider their rights impacted by the bank’s finance, including aiming to resolve the complaint with its client, and contributing directly to remediation of harms where appropriate. Civil society groups including Accountability Counsel, BankTrack, Equitable Cambodia, Inclusive Development International and the Centre for Research on Multinational Corporations (SOMO), which participated in consultations with ANZ as it developed its new Framework, welcomed the move as an important step toward accountability in the banking sector, while identifying room for improvement.

The development of a grievance mechanism by the bank follows a recommendation by Australia’s OECD National Contact Point (NCP) in June 2018 that the bank “establishes a grievance resolution mechanism (including publication of outcomes) to support the effective operation of its corporate standards in relation to human rights.” In response to a complaint filed by Equitable Cambodia and Inclusive Development International, the NCP found ANZ had violated its own policies and international human rights standards by financing a Cambodian sugar company that seized land from local farmers. In a conciliation facilitated by the NCP in February 2020, ANZ agreed to establish such a mechanism, while also agreeing to make a financial contribution to help remediate the harms suffered by the Cambodian farmers.

As part of the UN Guiding Principles on Business and Human Rights (UNGPs), endorsed by the UN’s Human Rights Council ten years ago, businesses have a responsibility to “establish or participate in effective operational-level grievance mechanisms for individuals and communities who may be adversely impacted” by their operations, so that grievances can be “addressed early and remediated directly”. BankTrack’s Human Rights Benchmark, which evaluates bank implementation of the UN Principles, has so far found no large commercial banks with grievance mechanisms in place that meet the UN’s effectiveness criteria.

Commenting on the new grievance mechanism, the groups made the following joint statement:

“Finally, ten years after the adoption of UN Guiding Principles on Business and Human Rights establishing that businesses should set up grievance mechanisms, the first example in the commercial banking sector has emerged. ANZ should be applauded for being the first mover, and we call on other commercial banks to adopt effective grievance mechanisms that follow and improve on ANZ’s example.

“We’re pleased that ANZ consulted extensively on the development of this mechanism, and we see many of our recommendations included in the design of the final mechanism. For example, the mechanism’s framework provides accessible eligibility criteria and states that ANZ will seek to use its leverage to encourage customers to prevent and remedy adverse human rights impacts, including through participation in the mechanism’s dialogue process.  It also requires ANZ to consider its own connection to the human rights impacts and whether it should contribute to remedy.

“In a nod to the Cambodian sugar case, the mechanism will also consider accepting complaints relating to allegations that a customer improperly acquired land and displaced communities to make way for a project financed by the bank, even if the land acquisition took place prior to the period of ANZ’s lending relationship.

“Further, the bank committed to reporting on the type of complaints received and their outcomes, and we hope this reporting will be detailed and timely enough in practice to indicate whether the mechanism is functioning well.

“Unfortunately, we are still unlikely to know which corporate customers of ANZ have been the subject of complaints, as the bank has not yet agreed to seek up front consent from customers – within its loan agreements – to disclose the financing relationship and cooperate in the grievance process should a complaint arise. ANZ’s very limited transparency about who it funds also means that communities affected by its finance are unlikely to be aware of the mechanism in the first place.

“The success of this mechanism will be determined by whether communities are able to reach and engage in the process, and ultimately how effective it is in delivering remedies to those that have been harmed by corporations that ANZ finances. We will keep a close eye on how effective ANZ’s new mechanism proves to be for communities in practice and will continue to work in partnership with communities seeking remedy for harm caused by bank investments.”

For more information about the Cambodia sugar case, see: https://www.inclusivedevelopment.net/cases/cambodia-sugarcane-land-grabs/

[1] ANZ’s Grievance Mechanism Framework is the first framework for human rights complaints among large commercial banks to include a commitment to reporting outcomes. Previously BankTrack’s Human Rights Benchmark, published in November 2019, identified just one bank, National Australia Bank, with a complaints channel in place for human rights related grievances that is open to anyone whose rights are impacted by the bank’s finance; however this channel does not include a commitment to reporting outcomes. See banktrack.org/hrbenchmark.